Inteli-Hybrid Generators. JCB is now building hybrid gensets called Inteli-Hybrid Generators. The goal is to meet the latest and upcoming regulations in terms of emission levels. Turbocharger, intercooler and aftertreatment systems are needed to reduce NOx and particulate production, while keeping high efficiency. But this mission is getting harder, and that’s why hybridization is getting more and more popular in many transportation areas. Power generation is included. But hybridization in gensets is a bit different than in cars or other vehicles. Why? Because generating power means generating electricity, not movement.

Gensets frequently work at full power for few hours per day, and the rest of the time the load is low if not zero. But partial load means low efficiency levels, since gensets run at constant rpm (1,500-1,800). Specific consumption in nominal power is almost constant down to 75 percent, and loses up to 5 points at 50 percent. That’s a a threshold under which turning off the engine is the best choice. But an even better choice in this case is to let the batteries take the load. An engine that runs few hours at such low loads means also less oil consumption, maintenance costs and noise.

Two things make the hybrid generator different from the typical one. The first is the different color (blue layout instead of yellow). The second one is the big battery pack mounted beneath the generator. The Inteli-Hybrid internal combustion engine is the classic Jcb 4.4 liters four cylinders, available in three power configurations.

At 50 Hertz the line-up starts with the 66 stage IIIA col Gtc-1 S (65 kilowattampere). Prime rating is at 50.4 kilowatts continuous at variable load and can work without connection to the main grid. There is no annual limit to hours of operation and a 10% of overload power is achievable for 1 up to 12 hours. Stand by rating is at 56.8 kilowatts and can handle variable load in case of power failure, but no overload is permitted. 60 hertz versions can provide 10% more power but burn 25% fuel and are less efficient. 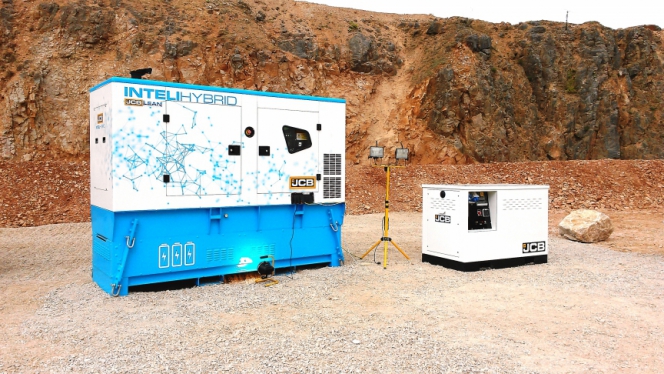 The battery pack is a traditional solution, made up of 24 x 2V sealed lead acid gel. Though it’s heavy and bulky, it’s reliability allows it to work within a wide temperature range (from -10 to 40°C), still being safe from fire and thermal runaway risks. Batteries are the same for all the versions, with a nominal capacity of 40 kWh, but with a 50% depth of discharge only 20 kWh are available. On average, that’s enough for 20.5 hours at 1 kW load, 4 hours at 5 kW. It can reach a continuous output of 7.3 kVA at 25°C, and a power peak of 20 kVA for five seconds.

Batteries have 15 years of maximum service life at 25°C, that is about 1,500 cycles at 50% Dod. They include inverter protection, overload, overheat, short circuit, low battery, excess battery voltage ripple control. If the battery level reaches 50%, diesel turns on, with two independent 120 Ah lead batteries that allow a fast charge of 80% in one hour. The alternator is a 4 poles star winding connections HM250A2 by Jbc. Insulation class is H, enclosure is Ip23. Two output types are available, a seamlessly switched single-phase, and a load-sensing three-phase output. Connectors are Ceeform standard.

A final consideration. JCB celebrated its leading role as a engine manufacturer in 2011 with the Diesel of the Year. As Graeme Macdonald, JCB’s CEO, said after the 3 litre launch at the Conexpo in Las Vegas: «It is hard to believe that only 12 years ago JCB did not produce engines. Today, JCB has produced 400,000 diesel engines».

Wärtsilä will supply the generating equipment for a new approximately 190 MW power plant to be built in Texas, USA
Himoinsa starts 2023 by joining the European Rental Association with the aim of further strengthening its presence in the rental sector.
MAN Energy Solutions and SH Defence of Denmark have signed an MoU to explore the potential for collaboration regarding the development and use of MAN 175D GenSets in a modular capability for naval vessels to meet requirements worldwide.
MAN Energy Solutions will supply 16 dual-fuel engines to three new power plants currently under construction in the Republic of Ireland; two are situated near Dublin, the third in the midlands town of Athlone